Located on the banks of the River Weaver in Northwich, Cheshire, the Anderton Boat Lift is one of the greatest monuments to Britain’s last canal age and is known as the ‘Cathedral of the Canals’. First built in 1875, it was the world’s first Boat Lift, and has since proved to be the prototype for many others across the world. Three-storeys high and built from iron, the lift was built originally to speed up the movement of cargoes between the River Weaver and the Trent and Mersey Canal. The 50 feet height difference between the two waterways was a constant problem to the salt barges that transported along the river and canal system.

The original solution was to use a revolutionary new system of hydraulics, where the huge tanks or ‘caissons’, each with watertight sealable doors, carry the boats up and down the lift and are supported by a single central hydraulic ram. A short interconnecting tunnel was constructed which allowed flow of the hydraulic medium, in this case water, between the cylinders. However, after a decade of operation with a high level of pollution in the river, corrosion of the pistons and seals resulted in closure of the lift in 1906. The lift was then changed to an electrically driven mechanical operation which continued to work until in 1983, when during routine maintenance work, serious corrosion was discovered and the lift was closed for a second time. 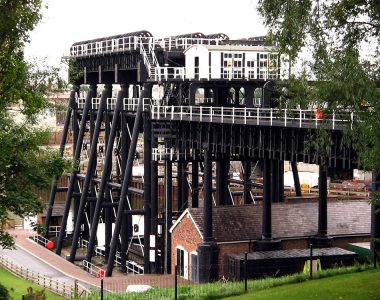 View of the restored lift from canal level. 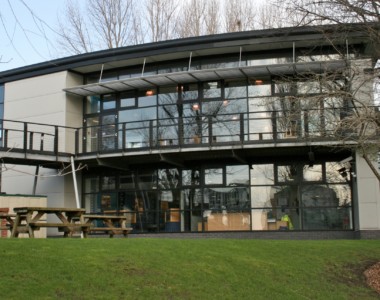 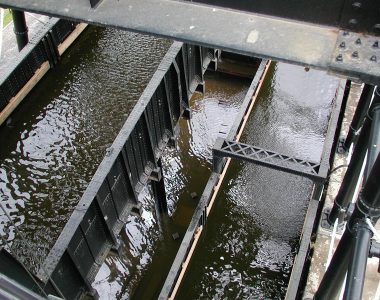 The cassions which can fit 2 narrow boats each. 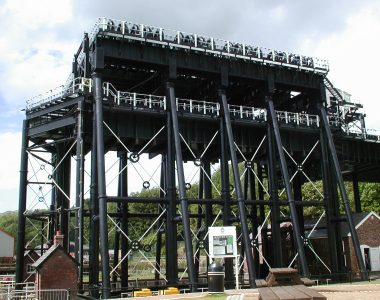 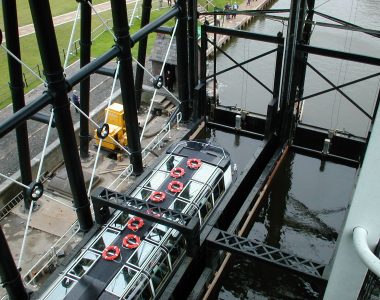 A boat after being lowered 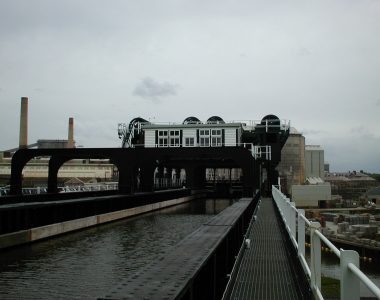 A view from the aqueduct 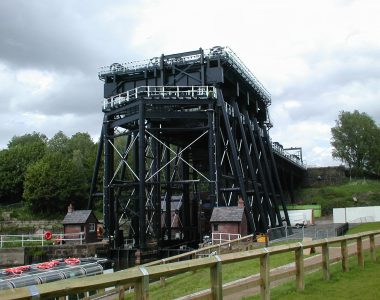 The plan was to restore the lift back to its 1875 hydraulic operation and Fairfields won the contract to design and install the new electrical system. This was made all the more challenging as the new hydraulic system had to be integrated into the original structure, which brought with it the challenge of integrating the legacy of the gates and wedges into the modern day control system.

In 1998, Heritage Lottery Funding of £3.3M was secured towards the total cost of restoration. The plan was to restore the lift back to its 1875 hydraulic operation and Fairfields won the contract to design and install the new electrical control system. This was made all the more challenging as the new hydraulic system had to be integrated into the original structure, which brought with it the challenge of integrating the legacy of the gates and wedges into the modern day control system.

The original system operated by means of hydraulics, with water being the medium, and relied on a difference of water levels between the two caissons to make the descending caisson heavier. The other caisson was filled from the aqueduct to a level 150 mm higher than that of the lower river caisson. A valve connecting the two rams was then manually operated to allow the caissons to change positions. However, trying to mirror this design led to problems in achieving the differential pressure between the two caissons. This led to a ‘fully pumped’ design system having to be implemented with the hydraulic medium being mineral oil.

Two methods of operation were designed into the new system; a ‘Balanced Mode’, where both caissons are operated simultaneously, and an ‘Isolated Mode’ which operates either caisson in isolation. With the new balanced mode, both caissons have an equal amount of water in them. With the caissons balanced, oil has to be pumped from one side into the other to achieve movement. This is done with two main 45kW pumps providing up to 1300 l/min of flow.

Control and acceleration of this flow is provided by a ‘S’ curve algorithm designed by Fairfields. Smaller 18.5kW pilot pumps can be used to overcome natural leakage within the system and maintain the caisson positions.

Position measurement of the rams is achieved by a highly accurate position measurement system known as ‘CIMS’. Each ram has been finely serrated and covered in a protective ‘CERAMAX’ coating. Cylinder position is determined by an induced pulse count from the serrated ram, giving an accuracy of 1024 counts/cm.

Fairfield used their expertise to design an interface card to the nonstandard pulse train, which provides interfacing to a standard high speed encoder allowing a high cylinder position accuracy of 0.01mm in 15m.

The lift was fully successfully restored to full hydraulic operation and re-opened to both boat traffic and visitors in 2002. The original 1908 structure and pulley wheels have been retained and are on display at the visitors centre. The weights that were once used to counterbalance the caissons were not rehung, but have been used to build a maze in the grounds of the visitor centre.

Operational control of the lift is designed to be remote from the structure itself so the main lift operator can control the sequence of the lift from the Visitors Centre, utilising the CCTV and public address systems, also provided by Fairfields. Operation of the gates, wedges and flooding valves are performed by the local operators, via interaction of local Panel View HMI interfaces.