The Rhombus Rocket is a popular roller coaster ride at Fantasy Island Resort in Skegness, Lincolnshire. The ride first opened in 1995. The ride consists of a 295m long undulating looped tubular steel track with a single train with nine linked cars, each of which can carry up to 4 passengers. The train completes two circuits of the track and travels at speeds of up to 12m/s.

The train is powered by nine 7.5kW electrical motors that pick up a supply from a power rail which runs alongside the track. The power rail is fed from a 160kW variable speed drive (VSD) that allows the control system to manage the speed profile of the train. The ride also has a lap bar actuator under the track in the station which, when raised up, powers the solenoids on the train which then lock and unlock the lap bars in position.

The original control system used an Alstom VSD and a Mitsubishi Programmable Logic Controller (PLC), both of which were identified as obsolete with no spares available. To protect from the risk of lengthy downtime in the event of equipment failure, Fairfield Control Systems was contracted to upgrade the control system incorporating, the latest technology and to comply with current relevant safety standards. 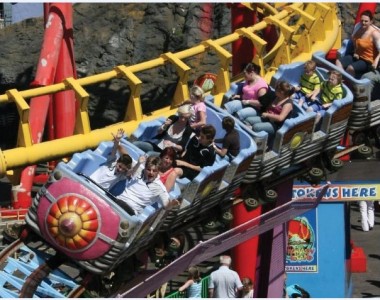 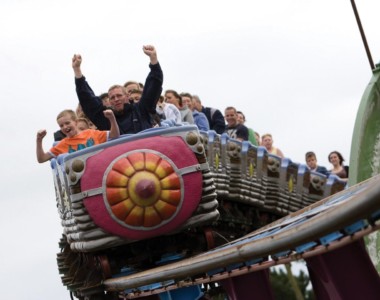 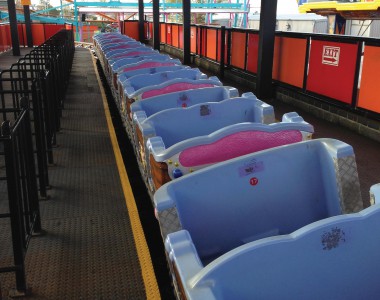 Our engineers carried out a detailed risk assessment of the existing ride that led to the identification of hazards requiring system upgrades.

As there was very little information available about the ride and its original control system, it was necessary for our engineers to undertake extensive trials to gain a full understanding of how the speed profiles were configured and how the ride reacted to various sensors and commands.

Our engineers carried out a detailed risk assessment of the ride that led to the identification of a number of hazards that required system upgrades. For example, the existing VSD made use of large braking resistors for slowing and stopping
the train. The issue with braking resistors is that, if they fail, the ride will not have adequate braking and could overheat, with the risk of fire. To overcome this, a replacement Siemens VSD was installed, which can return all of the regenerated energy to the mains power supply, removing the requirement for the braking resistor.

The original system used a combination of a PLC and relay logic to control the ride. A new Siemens PLC was installed  during the upgrade to replace the obsolete Mitsubishi PLC and, following a review of the system, the relay logic was implified with some of the logic being transferred into the PLC. A Human Machine Interface (HMI) was also added, which gives visibility to alarms, statuses and allowed set points to be adjusted.

It is common practice for a Maintenance Engineer to go under the station platform to carry out routine inspections of the train. Previously, during these inspections, the train and lap bar actuator were often operated using the manual controls on the main control desk on the platform. However, this was deemed to be hazardous as the engineer under the platform was not in control and had no immediate means of stopping the movements in an emergency. To address this, a new  maintenance control station was installed under the platform to enable the Maintenance Engineer to instigate the train and lap bar movements himself.

Another enhancement was the interlocking of the gate into the maintenance area to ensure that the train could not be operated remotely while the engineer was working under the platform.

The ride was successfully upgraded by Fairfields with the new control system being installed, tested and commissioned over the winter of 2014/15. The ride was re-opened to the public in March 2015 after being signed off by the Park’s Safety Assessors, Leisure Technical Consultants Ltd.

From the beginning to the end of the project, everyone that I dealt with at Fairfields displayed outstanding professionalism, had a complete understanding of the complexities of the project and have ultimately delivered a product that has drastically reduced the downtime of one of Fantasy Island’s busiest attractions. I would have no hesitation in working with Fairfields on any future projects.