The Bayt Abdullah Children’s Hospice provides multi-professional, specialist, paediatric palliative care and support to children with life limiting or life threatening illnesses who are resident in Kuwait. The hospice aims to improve the quality of life for children and their families from diagnosis and beyond by offering these services, tailored to the individual family’s needs, in the location of their choice, whether at home, in Bayt Abdullah Hospice or through their outreach programme in a local hospital.

The hospice is situated on a 20,000m2 plot in the Sulaibikhat Bay area of Kuwait. It has been privately funded by donations from all over the world. The children expressed a wish to visit Disneyland, but as this was not possible, it was decided to bring a small part of Disneyland to them by the creation of a spectacular playground area with a ferris wheel as its centrepiece.

The ferris wheel has a diameter of 15 metres and incorporates 8 circular capsules, or pods, each of which can accommodate 5 passengers plus a wheelchair user. The partially glazed pods were designed to give views across a nature reserve, flamingo feeding ground and the Persian Gulf.

The wheel is opened by The Grand Prince 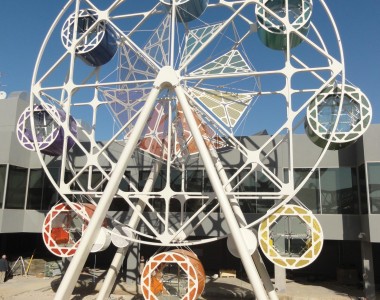 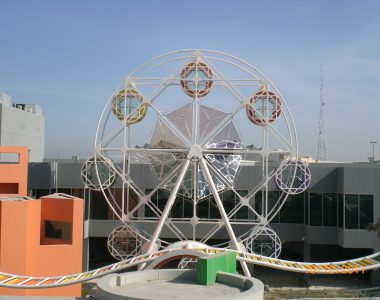 The harsh environmental conditions were a particular challenge - the daytime temperatures can reach nearly 50° C, whilst the temperature of equipment in direct sunlight can be considerably higher.

The wheel is rotated by means of four 4kW motors controlled by a single variable speed drive. There is also a standby emergency drive which enables the wheel to be rotated and the public evacuated from the pods in the event of a main drive failure.

The operation of the wheel is controlled by a Rockwell PLC with PILZ safety system which inhibits rotation when pods are being loaded and unloaded. The control system utilises laser technology to determine wheel position and speed by counting retro-reflectors mounted on the rim of the wheel.

The control panel was designed, built and tested in the UK before being shipped to site with the wheel. Once on site, the cable installation was carried out by local contractors, under the supervision of an engineer from our Servicing and Commissioning Team. We subsequently commissioned and carried out site acceptance tests on the control system.

The harsh environmental conditions were a particular challenge on this project. The heat was a problem as daytime temperatures in Kuwait can reach nearly 50° C whilst the temperature of equipment in direct sunlight can be considerably higher. For these reasons, the control panel was installed in an air conditioned building. However, the instrumentation and cable sizing still had to be carefully selected to be able to withstand the heat. The selection of the type of sensors also took account of the presence of sand in the environment.

Another challenging aspect of the project was the management of the local contractors for the cabling works, as required by the client. Fairfield Control Systems provided detailed cable schedules and block diagrams to the local contractors and then, before powering up the system, carried out point-to-point testing of each cable to ensure it had been correctly connected.

The grand opening of the hospital was attended by approximately 2,000 local school children, local dignitaries and VIP guests from the UK. The Ferris wheel was officially opened by The Grand Prince of Kuwait.

The ferris wheel is now the focal point of the play area which includes a magic carpet, rooftop walkway and observation platform, all of which are wheelchair accessible. These structures are integral to the palliative care ethos of the hospice.

Since the opening, our engineers have returned to site to carry out routine preventative maintenance on the control system.

Thank you to Fairfields for the extra efforts taken to get the wheel running for the inaugural day. It was sensational and the climax for that day.