Selby Swing-bridge is an iconic Victorian structure, located just to the north of Selby Railway Station. It carries the rail lines between Doncaster and Hull over the River Ouse, which at this point is navigable. The swing-bridge is consequently in regular use.

The bridge was built in 1889 by Messrs. Nelson & Co of York and the Cleveland Bridge Company of Darlington to allow river traffic to pass without hindrance under the railway. The bridge has four fixed spans and a moveable span of approximately 40m that rotates through 90 degrees to lie parallel with the north bank of the river. By this means a clear 18m wide navigation channel is achieved. 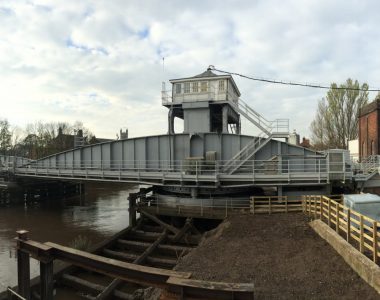 A reliable and robust failsafe method of operation was essential, together with a significant reduction in bridge operating time.

This project entailed the most extensive MEICA refurbishment of the bridge since it was first built. Fairfield Control Systems was responsible for the detailed design, installation and commissioning of a replacement control system for the bridge that provided automatic operation rather than the original manual operation.The new system was required to give a reliable and robust fail-safe method of operation that would also enable the bridge to be available to rail traffic significantly sooner than at present.

AMCO, in conjunction with KGAL, developed the initial proposals for refurbishment of the swing-bridge that were accepted by Network Rail. Fairfield Control Systems was then commissioned by AMCO to implement the ICA aspects of the refurbishment.

The original operation of the swing-bridge involved the withdrawal of proving bolts by mechanical rodding. Hydraulic actuation then withdrew tapered nose-bolts and the movable resting-blocks which allowed knuckle gearing to raise each end of the bridge by 12mm for operational clearance.

During the commissioning phase of the project, it became apparent that there was an issue with excessive lateral movement of the pintle pivot, with the result that the rails did not align properly when the bridge was closed. To rectify this,  Fairfields proposed and subsequently changed the control from the initial design with a digital commander type to an analogue signal from the PLC. This allowed closer control that allowed the PLC to bring the bridge gradually into its final resting position.

In addition, due to extensive experience in the control of moving structures, Fairfields was instrumental in changing the proximity switches in the original design to a type with a larger detection range.

The new operating system for the swing-bridge is now controlled automatically by opto-electronic transducers and de-acceleration actuation, which means that the bridge glides to an exact stop. The bridge operator now uses a touch screen HMI rather than the previous bank of levers. The bridge refurbishment has allowed the speed limit for trains over the bridge to be raised to the maximum line speed of 25mph.

This is the most significant improvement made to the bridge since it was built in 1889. Many parts of it will not need any further work for decades. Engineers have worked around the clock to complete this work in the shortest possible timeframe.