The Grimsby Corporation Road Bridge at Alexander Dock is a Grade II listed and relatively rare Scherzer rolling lift bascule bridge. It was built in 1928 to replace an existing swing span bridge to allow shipping traffic access to the former fishing dock from inland waters. After nearly 20 years out of commission, North East Lincolnshire Council in association with Mason Clark Associates enlisted Fairfields to install design and commission an electrical control system and main motor drives for the bridge. As the area was set for major investment, it was hoped that the waterway would be used for both pleasure and business once again.

Originally, the bridge was lifted by means of a steam powered tugboat, but for the 10 years prior to the re-instatement of electrical power, the bridge had to be hand-wound whenever it was required to be lifted, which took up to half a day to complete, using a team of eight workers in shifts of two to complete the lift. This meant that the road over the bridge would have to be closed for most of the day when a lift was required. Due to lack of use, the bridge began to seize up, meaning that each bridge lift became harder to achieve and longer to complete. 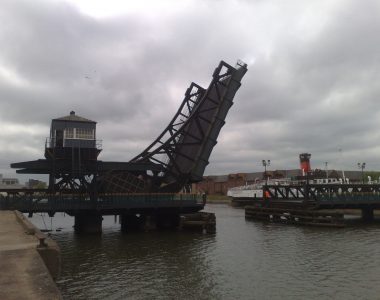 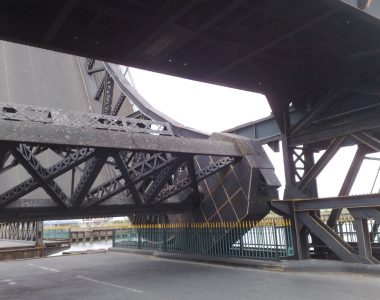 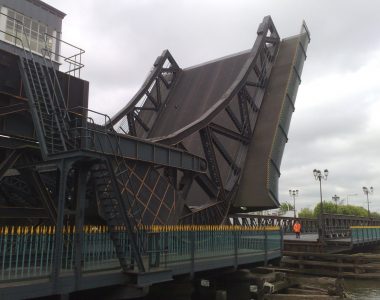 In this design, a dynamic braking system is used which directs the energy generated back into the electricity supply. The benefits of this are mechanical wear is reduced and the generated energy is sold back to the supply company, off-setting the electricity charges incurred in the operation of the bridge.

The bridge is 150m long and 12m wide and weighs a counterbalanced 741 tonnes. It is lifted by means of two DC motors with in-line integral gearboxes. These are controlled by two digital drives in a load sharing configuration. This allows the operator to choose between either of the two drives as master, with the slave drive following, using current demand feedback. Both motors are connected to the bridge lifting mechanism by means of a single drive shaft. This means that both motor units have to run at a synchronised rate: up to 450rpm with an output torque of 750 NM each. The lifting power is supplied by two 460V DC motors, each with a power rating of 35.5 kilowatts. The drives control each of the motors independently; essentially the two units are separate in their control up to the main shaft. The power sharing function is achieved by using the current demand and the current feedback functions of the drives. When the bridge is lowered the energy that is generated would normally be dissipated as heat through the braking system. In this design, a dynamic braking system is used which directs the energy generated back into the electricity supply. The benefits of this are mechanical wear is reduced and the generated energy is sold back to the supply company, off-setting the electricity charges incurred in the operation of the bridge.

Although there is very little shipping traffic, the bridge is covered by an act of parliament which requires it to be lifted upon certain requests. The restored bridge has been in back in use by traffic and pedestrians since 2000 and is still lifted occasionally for testing and maintenance purposes (at least once per year) and now serves a large supermarket and heritage centre.